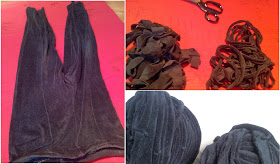 I made a cowl from a pair of old velvet trousers my mum wanted to throw away. I cut the trousers into stripes (just like making t-shirt yarn, but with only about 1cm width, because the material is rather heavy), tugged the stripes (very gently) and started knitting.

The cowl is knit diagonally. 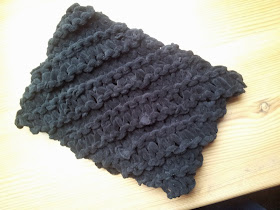 I used 12mm needles, but thicker needles can be used as well.

Knit until you run out of material - ideally until the cowl would fit nicely over your head. Then connect the ends by grafting or sewing.
SR um 11:55 Keine Kommentare:

These stretchy wrist warmers are knitted in the round and very easy to knit, i.e. the pattern is suited for beginners. The stitch pattern is called "Bamboo stitch" - at least where I come from ;) 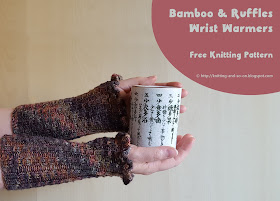 This work by Knitting and so on is licensed under a Creative Commons Attribution-NonCommercial-ShareAlike 3.0 Unported License. 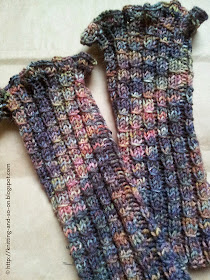