This new playful scarf is great to display the lovely colors of yarn with a long color gradient. It's made up of stacked stitches for the fringes and modularly knitted diamonds. 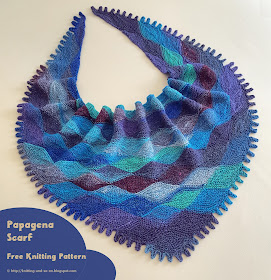 As to the name: When I posted a picture of this scarf progress, somebody felt reminded of the Queen of the Night from Mozart's opera "The Magic Flute". I really liked this association - however, I felt that the scarf looks a bit too ragged to belong to the very elegant and cold figure of the Queen of the Night, but better fitted to the persona of Papagena.

русский / Russian: Fellow Raveller lutik made a video explaining this pattern (in Russian): It can be found here on YouTube. Спасибо!

Dansk / Danish: A danish version was written by MarianneHo (Ravelry name). It can be found here on strikkeglad.dk or here as a PDF. Mange tak! 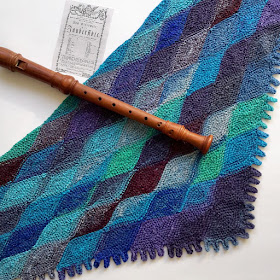 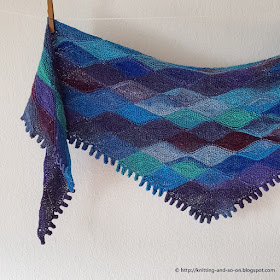 Depending on where the module is placed, it may be changed a bit as explained in the instructions.

Knitting the tip of the scarf 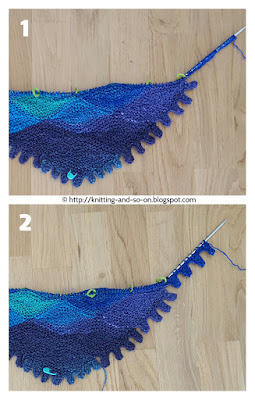 Move the RS-marker to the other side of your knitting

The photos on the right show how the piece looks while knitting Rows A and B of an Inc-A type module.


Layer 2 and all subsequent layers

Weave in ends and block it. 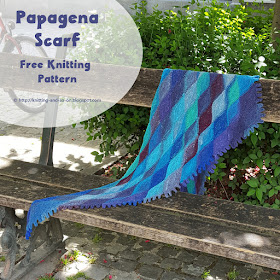 This blogpost was featured at Oombawka Design's Link and Share Wednesday No. 147, on the Link your Stuff #59 Week 24 Link Party at Lunamon Design and on the Knitting Love Monthly Link Party. Thank you!

Currently I love watching DIY videos on YouTube - especially sewing tutorials and even more especially tutorials where people use thrifted materials to create something new and stylish. Currently, my favorite channels are:
They all have wonderful ways of creating their own patterns from clothes they already own and a great way of explaining the mechanics of sewing.

That's why I wanted to do something similar - however, with a knitting spin. I decided to use a t-shirt that had holes in the front part (just below the neckline) and "cover" these holes with a knitted collar. Here's how the piece looks in progess ... if it works out the way I want, I guess I will write a tutorial. 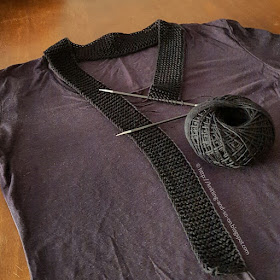 My mobile needed a new sock - so I knitted one with cotton leftovers from a sweater project. It's a quick and easy knit - interesting if you want to learn new techniques like Judy's Magic Cast-On or grafting garter stitch. 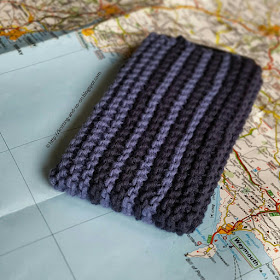 Size and Gauge
Unstretched my phone sock is about 7 cm wide and 10.5 cm high. My gauge was 9 stitches for 5 cm and 18 rows for 5 cm.
I made my sock intentionally smaller than my phone because cotton fabric usually stretches and widens. 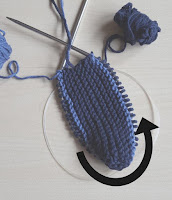 Now turn your needles around in a way that you're looking at the garter stitch bump and that you could start knitting.
The rows will be knitted in a U-shape - as shown in the picture on the right. The arrow indicates the knitting direction in all RS rows. 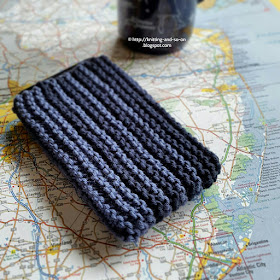