I'm currently on holiday and have a lot of free time - which is absolutely lovely. But due to the ongoing restrictions, going out much is not exactly advisable. So I am basically staying at home and trying to get creative.
One of the things I absolutely wanted to do, is to improve my sewing skills. And since even shopping for fabric is not much fun nowadays, I'm using old stuff that I don't wear any more. (Plus, it's more fun to to use what I have :)
So yesterday, I browsed Pinterest to get ideas on how to fashion a skirt out of old denim jeans. there are quite a few tutorials around, but the way most of them dealt with the crotch wasn't quite what I wanted. Then I found this picture on Pinterest - and I instantly knew that I had to try this ... 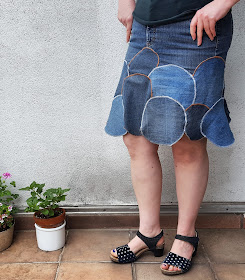 I'm quite happy with the way the skirt turned out. And even though, I tend to wear trousers pretty much all the time, I might actually wear this in public. 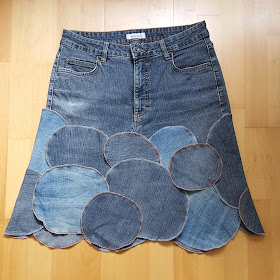 I guess I have more potholders (or coasters or doilies) than anyone actually needs. But I think they are a great project for trying out new knitting techniques or to knit motifs.
Here is the pattern for a circular potholder with a flower motif – an idea that I had for quite a while.
Since this is a three colour intarsia project with three colours that also uses short rows, it can be quite fiddly. If you've never done intarsia and/or short rows before, this wouldn't be the pattern to start - sorry.
It is definitely NOT a beginner pattern. 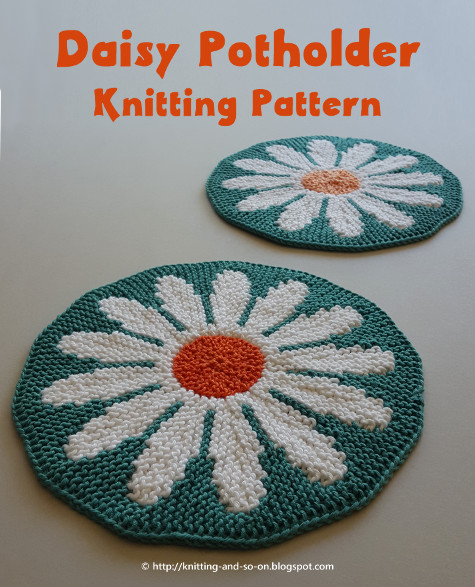 The pattern PDF is available via


The document is 11 pages long and contains:

The pattern instructions and the chart comprise only 2 pages - the rest are the technique tutorials and explanations of their specific application for this motif. 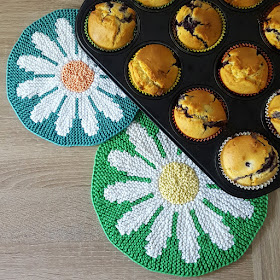 To knit this you need the following materials: 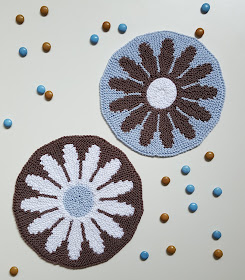