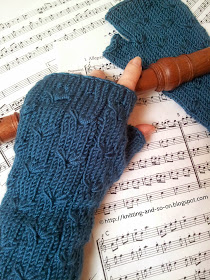 A pair of fingerless gloves with a flower pattern. The effect  is achieved by drawing additional loops through stitches two rows below.

Modifications for a two colour-version are given at the end of this post - as are modifications to make a smaller version (rather ladies size S).

This work by Knitting and so on is licensed under a Creative Commons Attribution-NonCommercial-ShareAlike 3.0 Unported License.

Pattern Chart
The pattern is composed of flowers repeated every 10th row with an offset of 5 rows and one purl stitch between the flower columns. 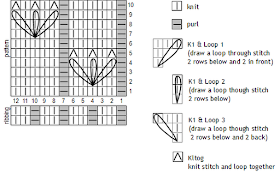 Repeat 3 times, but to start the thumb gusset change row 10 of the 3rd repeat as follows:
By starting the thumb gussets at different places the pattern on the two mitts will by symmetrical. 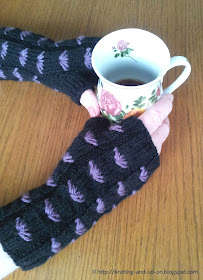 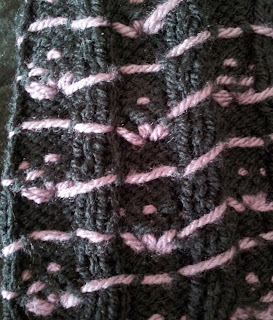 Modifications if you want to make a two colour version:
The photo on the right shows the WS to give you an idea how the yarn is stranded.

The two-colour version in the pictures is also smaller, i.e.it is rather a size S.