Recently, I bought an overlocker. It was threaded in four colors (blue, gree, red, yellow). Of course I tried it out with these threads because I was too lazy to change them (it's probably less complicated then it looks in the manual, but still ... ). I really liked the color effect on my grey test piece, so I thought seams like that might make a nice feature on the outside of a garment.
That thought matured quite some time in my head, and this weekend I thought I'd give it a try and started to construct a cardigan. I used different grey(ish) jersey fabrics - leftovers and recycled old t-shirts. I didn't use a pattern but eyeballed the pieces when cutting and assembling them (with my measurements in the back of my head).
Unexpectedly, it actually worked and I had a finished jacket on Saturday evening. The piece fits me well - even though the seams are not what you'd call neat and tidy ;-) 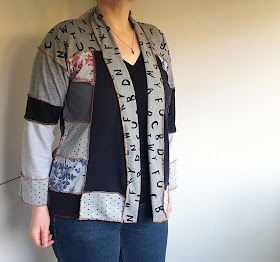 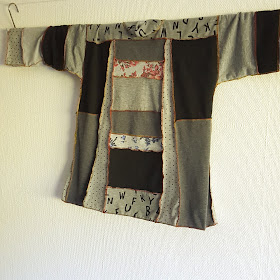 So, I decided to make a second one on Sunday - using two old XL sized t-shirts - also in the "seams on the outside"-look.  Unfortunately, the two of the thread bobbins were empty, so I had to learn how to thread the machine (and it wasn't that difficult - except for the fine motor skills that you need to thread the needles :) 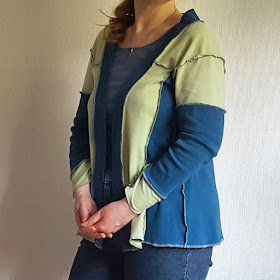 This second one (in light green and teal) is less successful in terms of fitting, but it's still basically a wearable jacket.

There are several things that I learned when making these two jackets: