Hat for a Friend

In January or February this year, I promised a friend to knit him a hat for winter. Unfortunately, I didn't have any good ideas what exactly to knit for him, but I felt sure that I'd have an idea in due course ... It turned out that this optimism was misplaced. Even in autumn - when I was reminded of my promise - I still didn't have an idea. I first tried something with a construction a bit out of the ordinary (see this Instagram photo), but it didn't work out the way I had planned. Then I decided on a sideways construction ... and since I still didn't have an original idea that would look good on a man, I decided to search Ravelry for an appropriate pattern. And I found Tychus. 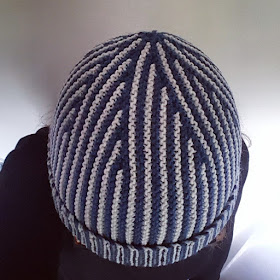 Tychus is a hat pattern by Brooke T. Higgins that is available for free via Ravelry or directly on knitty.com. Currently, there are more than 1600 projects listed for this pattern on Ravelry. It is knitted sideways with a short-row construction.

I didn't keep to the pattern, but made a few modifications - especially since I had started with yarn of a different weight. Here's what I did differently: 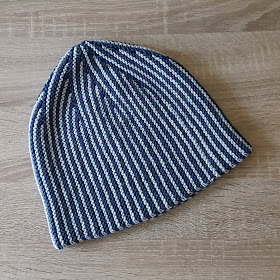