I like knitted Christmas ornaments. This year I wanted to knit a snowman. I first tried it with a sideways garter stitch construction that I had used before (e.g. Xmas trees or little Xmas Gnomes), but I didn't get the shaping right (see this photo on Instagram). So I decided  to do a stockinette, bottom-up construction. After finishing, the snowmen also got little hats and scarfs.

Please note, this is fiddly work - esprecially the cast on and the first few rounds, but the resulting snowmen are really cute. 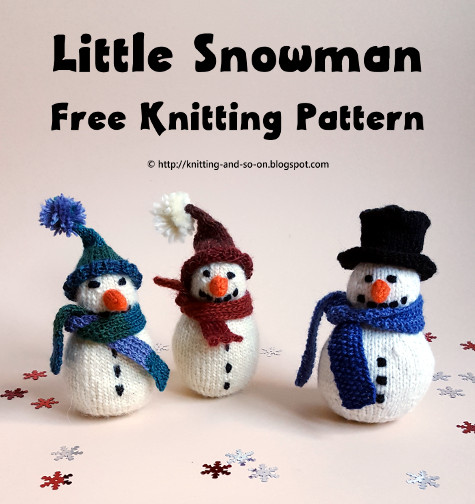 This work by Knitting and so on is licensed under a Creative Commons Attribution-NonCommercial-NoDerivatives 4.0 International License.


Size and Variations
The snowmen wearing stocking caps are knitted exactly to the instructions (with 2.5mm needles) and are about 10 cm high.
The one wearing a top hat is knitted with thicker yarn and with 3.25mm needles. Here I left out rows 24 - 28 (k all rows in the middle of the body) - so he's a bit rounder and shorter in proportion. 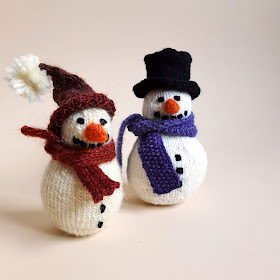 Leave the tail of your bind off - it will be used for stitching the carrot on later.
Stuff the tail from your CO into the carrot.

You can stitch face and the (coal) buttons after you've finished, but I've done it while knitting - and that is how it is described in the pattern

With black yarn and tapestry needle stitch on 3 coal buttons. Start to stuff the body.
Continue knitting with white yarn.

With the tail of the carrot, stitch on the carrot. Make sure to align it on top of the coal buttons.
With black yarn stitch on two coals for the eyes and 5 coals as a mouth.
Fill in stuffing. You can use the blunt end of a pencil to make sure that the stuffing gets everywhere.

Fill in a bit more stuffing.
Cut white yarn and thread the tail into a tapestry needle. Catch the remaining 8 stitches with the needle and pull tight. Fasten off and weave in ends.


Hat: Stocking Cap
CO4 and join in round.
Knit in rounds increasing by 1 st per round - until the hat fits over the head of your snowman.
(I knitted until I had 32 sts on my needles).
Finish with 4 rounds of ribbing (either k1p1 or k2p2).
BO in ribbing pattern.

Attach a small pompom to the top of the hat. (I used this method and a dessert fork to make a pompom - but it still was a big too big.)
Weave in ends


Scarf
CO8 sts
Knit the same ribbing you did for the hat - either k1p1 or k2p2 - until your scarf measures about 25 cm (or until it is long enough to fit around the snowman's neck).
BO and weave in ends. 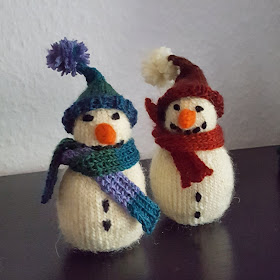